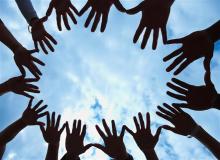 This post is a continuation of  Creating Successful Teams - Part 1

One book I read relatively early in my management career was Principle Centered Leadership by Stephen Covey.  I highly recommend this book to anyone, and especially to those who find themselves in leadership roles.  Relatively late in the book, Covey covers what he refers to as "Corporate Constitutions".  The following passage particularly resonated with me:

And then, a little further on:

"If you identify your essential purpose and set up a shared vision and values, you can be successful with any situation that comes along.  The mission excites people.  It get them to deal with problems and to talk them through in a mature and reasonable way.  If there is a dream, a mission, a vision, it will permeate that organization and shape its actions."

This made so much sense to me when I read it many years ago (not just for corporations but really for any organisational unit) that I immediately started to put it into action in every organisation for which I was accountable.  And it works!  It's always a collaborative process, and I've generally broken it down in to establishing three things – mission, vision, and values.  That is, what are we about, what do we want to be, and what do we value / what are the principle to which we will hold in doing what we do?  Making it collaborative meant I got a much better product than trying to go it alone, as many bright minds were thinking about it, not just me.  And, because it was created by my teams, team members had as much ownership over this as anyone, which means they wanted to make it happen; they would become self-governing.

Regarding values / principles, Covey says this:

"Principles are timeless, universal laws that empower people.  Individuals who think in terms of principles think of many applications and are empowered to solve problems under myriad different conditions and circumstances."

Creating a shared vision and a solid set of guiding principles / values will go a long way to creating a positive and focused team if you do them well, especially if you are careful about the values and ensure they align to and support the kind of culture you want.

Finally, in terms of a positive culture, I strongly encourage leaders to do their best to eliminate work-place politics, and be vigilant in spotting it.  There will always be some degree of politics in any interaction between two or more people.  However, I have been in environments where much of the useful, productive capacity of people was consumed with dealing with politics that should never have been allowed to flourish in the first place.  That kind of politics is poisonous to a positive, creative, successful culture.  As a leader, I've worked hard to be a buttress against that politics from the outside reaching into my teams, dealing with it instead myself, and working hard to eliminate any politics within my teams.

Just as there is ownership and commitment from team members when they are part of the process in creating the team's mission, vision, and values, so too is it there in every other aspect of the work.  I've always believed in being able to hold one person accountable for an undertaking, be it a small project or an entire function, and generally structure my teams that way.  At the same time I firmly believe that appropriate participation by everyone on the team is critical to the team's success, because people come away from that collaborative process with a sense of ownership.  If my leader says to me, "We have this challenge, and I think you're the right person to tackle this piece.  What do you think?" I'm going to feel invited and respected, not commanded and relegated.  If the conversation continues with, "How do you think we should tackle that piece, and what do you think it might take to do it?" I'm going to feel even more respected, because my ideas are being sought.

That's not to say that I've never challenged an approach by my teams, for I certainly have.  But when I've challenged them, it's still been in a collaborative way, so that we get to the right place, and they still own the solution.  And then I can hold them accountable to execute it.  And usually, they're motivated to execute well.

Collaboration has to be genuine.  If you go into a collaboration exercise with your mind already made up, people will know.  So don't do it.  Either go into the exercise with a willingness to explore, or be honest with the team as to why your mind is set.  There may be very good reasons, such as legislation / regulation, direction that you have received that you cannot alter, or other constraints.  But at least by explaining, you are still being somewhat collaborative in that at least people know why things are set (see the section on Communication in Part 1), and they may still be able to come up with some ingenious ways to address the challenge that they would not have otherwise without your openness.

It's written about again and again, but still bears reiterating.  When people do a good job, it should be publicly celebrated and rewarded.  Besides making the employee or team feel appreciated and getting even better work out of them, it provides an example for others to follow.  People are generally motivated when they are recognised and rewarded for thier achievements, and conversely demotivated when they're not.  I've had good results from a regular recognition programme, such as at a monthly department meeting, or once a quarter.  Movie gift certificates, a gift card to a restaurant or store, or other such low-cost tangible rewards are great to use for these recognition events, and won't break the bank.  If you can, throw a party to celebrate successes.  You'll get back the cost in multiples from increased commitment, ingenuity, and productivity.